Why is it that summer seems to just disappear at an alarming rate and slide straight into miserable, I mean Autumn?

It’s raining here at the moment, here being Newcastle-under-Lyme, Staffordshire, England for anyone who didn’t know!

Not just a light rain but as I write this in our conservatory, really heavy and loud rain! The sort that gets you wet, my nan used to say. It’s funny but I never asked her what sort of rain doesn’t get you wet!

I don’t mind rain per se, but when the nights are drawing in and it’s a bit chilly (I sit here in my big chunky cardy) it’s a bit depressing! It’s actually dark now and it’s not even eight o’clock! The teenager would normally still be out with friends till turned eight but even she is now hibernating watching Young, Dumb and Living off Mum, (trash T.V. at its worst, I know!).

Hubby looks forward to autumn. He likes the clear, crisp, frosty days and dark nights are welcomed. I do not like autumn or winter for that matter. I used to love winter. I would watch the weather forecast everyday to see if snow was on its way. But not anymore. There is no reason for it, i just find it stretches out for too long. Spring is an awful long way off! (I sound like I’m wishing my life away!)

I know we could have an Indian summer because September is usually a nice month and winter is still a good month or two away but at this precise moment, if I could fly off to sunnier and warmer climes, I would! 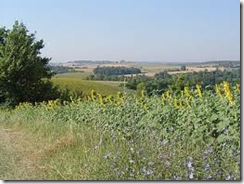 There is something about being in the countryside that is good for the soul. Last Sunday, hubby, teenager, toddler and I took the dog for a walk. It was a perfect summer morning and we headed for a wooded area not far from us,  unfortunately known locally as “the butts”!

The weather was fantastic, no clouds to be seen and the sum was warm on our backs as we climbed the hill to the wood.

It’s not very often that we all go out together to walk the dog, so it was lovely to be out as a family. The toddler in particular enjoys these walks, as he likes to look for sticks to throw for the dog. Sometimes, what he picks up isn’t quite what the dog has in mind and to the exuberant toddlers annoyance, completely ignores these “sticks” when thrown for him! 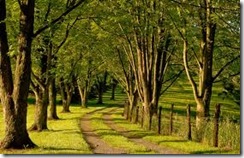 When we reached the top of the hill and entered the wood, the air was cooler and to the relief of the teenager, the ground much more flatter! As we made our way through this shady woodland, we came to a clearing, which looked out over a field of tall grass (about 2 feet!), with huge trees meeting its boundary on the opposite side. It was absolutely stunning. The grass was swaying gently as the breeze whispered through it. Time had stood still. A calmness seemed to descend over us as we stood taking it all in. I have to say that at that moment, I didn’t want to leave. It was perfect.

All too soon though the moment had passed, as the dog came hurtling past my legs followed by the toddler who had found a much bigger stick!