Whilst I was taking the teenager and toddler to their nana’s for the day so I could go the kid free place called work, (woo hoo!) Bon Jovi’s Livin’ on a Prayer came on the radio. It is almost impossible not to sing really loudly to this and much to the teenager’s disdain, I did! All the way to nana’s.

When it had finished, I told the teenager that I had danced to that particular song at the school leavers disco, many moons ago. Twenty one actually, God do I feel old now! The teenager obviously being too cool, just rolled her eyes and laughed.

But it got me thinking though about when I was sixteen again. I was one of those who hadn’t got a clue what I wanted to do now school was finished. There were plenty of those around me that were going to be a doctor, vet, teacher, lawyer etc. But I hadn’t a clue! I met hubby not long after I left school. He was working and I decided I wanted to as well. (What was I thinking?) College went out of the window and the working world came into view!

Now twenty-one years later, two kids, mortgage and hubby and I still working, I am ready to go back to college! Well, distance learning anyway. To anyone who has read my blog before, you will know that recently I was undecided about going back to study. Well, I am going to take the plunge and sign up for a course with the Open University that starts in November!!!! Cue fanfare!!! 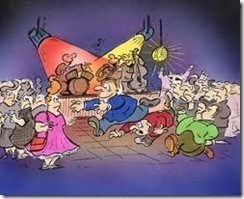 For anyone who fancy’s a sing with the truly gorgeous Jon et al, click below:

Bon Jovi Livin’ on a Prayer

4 thoughts on “Livin’ on a Prayer”