Last week, the family and I headed off to Cornwall for a weeks holiday. The weather prior to going had been particularly shocking and a bit of a wash out so a variety of clothing had made its way into the suitcases.

The journey down the motorway passed without incident and after a brief downpour whilst driving through Devon, the sun came out just before we reached Newquay in Cornwall. We decided to stop at Fistral Beach in Newquay, a mecca for surfers and beach dwellers alike.

Fistral is a fabulous place with numerous surfy clothing shops, cafes and a traditional bucket and spade emporium, all of which overlook the sweeping bay of soft golden sand coupled with huge rolling waves.

The toddler, who was so happy to out of his car seat decided to go at full pelt across the sand and fell into the nearest puddle of sea water! He stood up, then dusted himself down as if to say, “what the hell, I’m on holiday!”

As delightful as Fistral was, it was only a brief sojourn until we reached our final destination. About an hour after leaving Fistral, we reached our home from home for the week. Porthleven in west Cornwall. What an absolute gem of a place! Not so big to be full of the summer crowds and not too small to be able to walk round it in ten minutes. 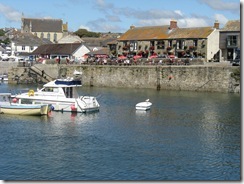 The Church stood at the end of the harbour wall and just behind it the dramatic coastline was a wonder to behold. You could see all the beaches and coves all the way down to Lizard point, the most southerly point of the British Isles.

Porthleven had it all. There were harbour markets three times a week. One day, hubby brought some smoked mackerel from one of the stalls, which had only been caught the day before and smoked overnight. Delicious! (he said, I can’t stand fish!)

The cottage delivered on every front too. It stood on top of a hill with views of the church, harbour wall and the beaches beyond. In the master bedroom, there was a settee at the foot of the bed so you could sit and take in the view.

The weather God was on our side that week, with blisteringly hot days almost every day!

We didn’t really go too far, preferring to laze away on the beach but we did go and have a look at St. Ives (another fabulous place but extremely busy), Falmouth and St. Michaels Mount*.

In all, we had a fabulous time!

* A funny thing happened when we went to St Michaels Mount in Penzance. St. Michaels Mount is a castle- topped isle in Mounts Bay. It is accessed by a long causeway from the beach to the island, that at low tide is easily accessible. When the tide is high, there are boats that go back and forth to ferry the tourists.

When we walked over the causeway, the tide was well out and we only saw the odd rock pool as we approached the island. We had had about an hour or so looking around when hubby overheard someone say that the tide was coming in. We moved quickly to the causeway, which was full of people walking in both directions. As we started walking, it became quite obvious that we were going to get our feet wet!

Luckily, teenager, toddler and I had shorts and beach shoes on. Hubby on the other hand had jeans, socks and trainers! Well laugh, I nearly cried! Teenager sauntered back along without a care in the world, toddler wanted to sit in the water and hubby ploughed through the water with an empty pushchair at about a hundred miles an hour!

When we eventually caught up with him on the beach, it would be safe to say that he was soaked through up to mid calf! Well we did have a laugh, (hubby did not!). As we walked off the beach, we spotted a lovely hotel overlooking St. Michaels Mount offering cream teas (yum). We decided to stop (I took no persuading!) and make the most of our last day (hubby put on a brave face!). Whilst hubby took some pictures of the island, he noticed some people were still crossing the causeway and the water was up to their thighs! I’m sure they must have been saying “what the hell, I’m on holiday!” Spoken like a true Brit!

This was taken at Praa Sands!

And this one is one of the beaches behind the church in Porthleven! 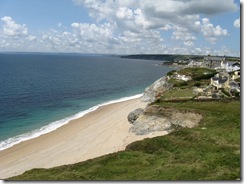 On the piccies front, all these except the top one at Fistral were taken by hubby!